If one can compare whether any two objects are similar, one can use the similarity as a building block to achieve more complex tasks, such as:

This is the first article of a set of articles describing the intuition, definition and use cases of cosine similarity in Big Data.

A vector, as it is defined in linear algebra, is a tuple of m numbers. In other words, the vector is a list where the elements are floating point numbers. The vector is of fixed size, which here will be denoted as m. m is the dimension of the vector.

One can also use the numpy vector class to work with vectors in Python.

From documents to vectors

Suppose that we look at the document:

Once you know the vocabulary, the vector representation of the document can be built:

As it can be seen, the vector representation loses information about the ordering of the words. From the vector, we can read how many times each word occurs in the document. We cannot reconstruct the original sentence from the vector. However, for many tasks the “vector approximation” is sufficient to capture the meaning of the original document.

When dealing with text documents the vocabulary can be of size of the order of 60000. Let us assume that the document contains 5 unique words. Then there are (60000 - 5) zeros. This means that representing vectors as lists in a computer program is not going to be efficient. This is easy to fix. We can use a hash table instead of a list, or a sparse vector instead of a dense vector.

The more serious problem is that if you take two randomly chosen documents from a collection, then most likely their overlap will be reported as empty. Partly the problem can be solved by converting the words to their root forms (a process known as stemming, e.g. job vs jobs), and collapsing synonyms (e.g. job vs. work) into the same word class. Not finding overlap when it should exist is a problem in machine learning known as “data sparsity” or the “curse of dimensionality”. There are special techniques to work around this problem but those will be discussed in a different blog post (UPCOMING).

Cosine Similarity is a way to measure overlap

Suppose that the vectors contain only zeros and ones. In this case vectors represent sets. The numberator is just a sum of 0’s and 1’s. We have a 1 only when both vectors have one in the same dimensions. Therefore, the numerator measures the number of dimensions on which both vectors agree.

The denominator is related to the size of the sets that each vector represents.

If one takes the view that cosine is a way to measure overlap, it is natural to compare the cosine to the dice coefficient and the Jaccard coefficient.

How does the above model apply to user profiles with click data? First, we can think of a user profile as a set of links (or pages) that the user clicked. We need to know the set of possible pages that the user can click to obtain the dimension of the vector.

What does the normalization mean?

Mathematically the cosine similarity is expressed by the following formula:

Instead of writing the above formula, we can first normalize the vectors $a$ and $b$ by dividing by their length

After this normalization, cosine similarity is simply the dot product between the normalized vectors.

Geometrically the normalization means that the vectors lie on a unit sphere in an m-dimensional space. If we are working in two dimensions, this observation can be easily illustrated by drawing a circle of radius 1 and putting the end point of the vector on the circle as in the picture below. The origin of the vector is at the center of the cooridate system (0,0). 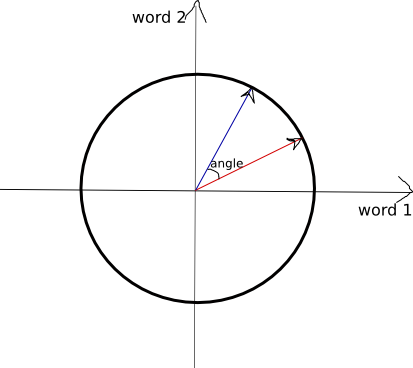 We can say that

Why is normalization important? Consider this question: how do you compare a short document to a long document. Normalization makes the documents comparable.

“Why normalization by vector length is good?” is a question that is much harder to answer. One can consider other ways of normalizing the vectors.

I kept the current presentation up to the bare minimum in order to give a working understanding which is enough for software engineers to build simple applications. In the next blog post, I will discuss a few simple but important trick to working with cosine similarity: a set of data transformations that substantially improves the quality of the similarity matching.