Most people would agree that pears are more similar to apples than to bananas.

However, it comes to the algorithmic comparison between documents, pronouncing documents as similar using computer code is not that straightforward. I personally feel that more powerful and precise concepts should be used than just to talk about “similar” documents.

For one thing, the widely used cosine similarity is the worst performing one in a recent study. Recent experimental results by Computer Science Professor Charles L.A. Clarke and John S. Whissell in their paper “Effective Measures for inter-document similarity” show that statistically founded methods perform much better than similarity based on cosine.

For the purpose of this post, I understand similarity as defined in Wikipedia: the inverse of a distance.

Document similarity is typically used in the following areas:

Beyond Cosine: A Statistical Test.

Deriving similarity from a hypothesis test

If we adopt the standard bag of words model, a document is represented as a set of counts or equivalently a document is a multinomial probability distribution over words. To make the result presented below more concrete I start with some basic definitions.

Using the terminology from statistical hypothesis testing, let H_0 and H_alt denote the null and the alternative hypothesis respectively.

The statistical test is:

Solving the above formulation leads to the use of the Jenson-Shannon divergence as a test statistic or document similarity. The Jensen-Shannon divergence is closely related to the Kullback–Leibler divergence (KL distance). The KL distance can be approximated by the Chi-Square Test Statistic with which more people are familiar.

For one possible derivation of the Jenson-Shannon divergence as a test statistic one can consult formulas 52 to 57 in http://research.microsoft.com/en-us/um/people/minka/papers/minka-multinomial.pdf

Here is the resulting test statistic or similarity between two documents with distributions P and Q: 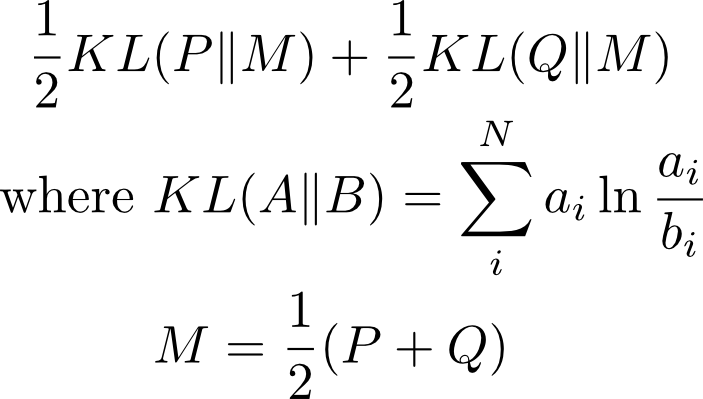 KL(A||B) can be interpreted as an “asymmetric distance” between distributions A and B. M is the average between the distributions P and Q. Based on the above formula, Jensen-Shannon divergence has the procedural interpretation:

The Jenson-Shannon divergence can also be written as follows:

It is helpful to derive the Jenson-Shannon formula from the hypothesis test itself. The machinery of hypothesis testing involves the so called likelihood ratio test and the related Neyman–Pearson lemma which justifies its usage.

The first step is to form the difference test statistic D:

If the null hypothesis were true, then we observe two independent samples, the counts of document 1 and the counts of document 2. Given two independent samples, how does one estimate the unknown probability distribution, which is most likely to have generated the documents. Here we switch from hypothesis testing to estimation. We have to find out what good estimation methods are there for multinomial distributions. From the literature of Information Retrieval we know that the preferred methods involve the so called smoothing technique. One standard reference to consult on this topic is “A study of smoothing techniques on language models” by Lafferty and Zhai). The probability of the data given H_0 is given by:

The key to successful usage of the above formula is to use a good technique of estimating the probability of a word under $H_0$ P(w_i|H_0). The standard choice is to use Dirichlet smoothing as specified in the Lafferty and Zhai paper. I am not going to dwell on this issue, but will only say that using a proper smoothing method makes a difference between the formula not working and working well. The use of smoothing has two interpretations:

First, it empowers the model with knowledge of English via the frequencies of words in English Second, it turns out that the usage of frequencies in English in smoothing results in downplaying the contributions of stop words.

In this blogpost, I showed an honest and rigorous derivation of one statistical method for measuring the similarity between two documents. I called the derivation honest in the sense that in every step of the way I was listing the assumptions I make. The cosine similarity is not really honest since its assumptions are not clearly stated. More over, by being explicit about the assumptions, we can actually consider if they hold for our data and we can test them. We can also revisit and modify some assumptions. For example, we could include assumptions about document length, change the multinomial distribution to a Poisson distribution and even include expansion through related words. The test of homogeneity hypothesis test method is general as it allows us to use the same framework and adapt even BM25 and DFR formulas from text search to “symmetric” document similarity.