Suppose you want to count the number of unique visitors to your website. The obvious method is to create a hash set and add all the IP addresses to this structure. The size of the structure is the desired number of visitors. If the number of distinct visitors is too large the obvious approach will not work since the memory required to hold all unique IP addresses is too large. The HyperLogLog algorithm is the clever solution to this problem.

The HyperLogLog algorithm is an approximate probabilistic algorithm. Below I explain the intuition behind this algorithm using more pictures than actual math. This algorithm has been called magical since the obvious solution requires $n*\log(n)$ bits while the clever solution uses only $\log(\log(n))$ bits. I hope my explanation dispells some of the magic. It should be noted that the choice between the ‘obvious’ and the ‘clever’ algorithm entails a fundamental trade off between space and accuracy: if you compromise somewhat on the accuracy, you can save a lot of space.

We can think of a long number as a bit string of 64 bits. One can map any string (or any object) to a long number or equivalently to a bit string by hashing. Well-chosen hash functions will ensure that distinct strings (objects) will produce distinct hashes in most cases. Even if the input consists of longs one should still hash them since it is essential that the algorithm operate on random bit strings. Hashing randomizes the actual ids. As we’ll see this randomization is very important.

Here is an encoding of some numbers as bit strings of 32 bits (the least significant bits are on the left side):

Here are some random numbers encoded as bit strings:

Let’s organize the bit strings shown above into a binary tree as demonstrated on the picture below: 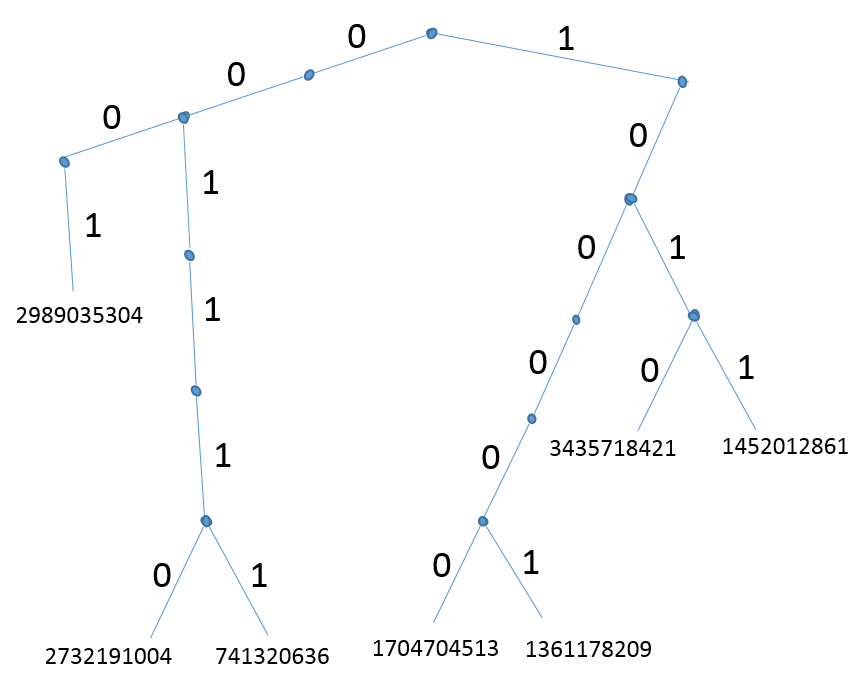 This drawing contains the main intuition behind the workings of the algorithm. Since the input is hashed to random bit strings, we can think as this process as building a tree from random strings. This means that we are essentially building a random tree. One can see that:

Since each leaf is equally likely the tree is balanced ignoring the variations that come from the randomness.

One fact to realize about balanced binary trees is that they are “extremely flat”. I mean the width of the tree is exponential in the hight as illustrated on the picture below:

If one has $n$ distinct items, they can be stored in a balanced binary tree of height $\log(n)$. To store the height itself, one needs $\log(height) = \log(\log(n))$ bits. When the tree is random, the height is a random variable with a value of around $\log(n)$. The HyperLogLog algorithm watches the height of the tree as we insert new items. Knowing the height, one can infer the size of the tree, which is related to the number of distinct items. The dynamics of the algorithm are illustrated in the following picture:

An important property of the algorithm is that seeing the same item again does not change the structure used for counting. This is because if an item is seen twice, it will simply re-generate the same path in the tree.

Let’s choose the left-most path in the tree consisting entirely of 0’s. Let us keep looking at the path as new data comes in.

As we see more and more data, we are likely to see longer strings with prefixes 00…01. For example, here is a simulation that shows how the prefixes of type 00…01 appear:

As one can see the algorithm interleaves stages of skipping items that do not start with 00…01 (or start with 00..01 but were already seen) and increments a counter because of seeing a longer prefix of 00..01. If the counter is set to k at some stage, we expect to observe roughly 2^k distinct numbers before an increment of k happens. One can also observe that the counter is quite noisy. In the run above, the counter jumps directly to 5, skipping stages of 1,2,3, and 4.

The above procedure is a building block of the HyperLogLog algorithm.

As it was demonstrated above the counter is quite noisy. To reduce the variance of the estimate, multiple independent counters are used and averaged (or the median is taken).